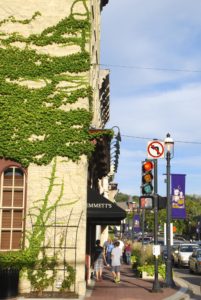 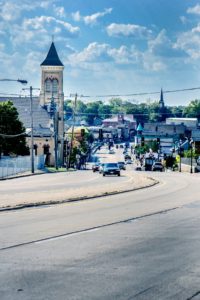 In 1835 Elder John and Nancy Oatman established a tavern and a store that became the core of the community. Others settlers came, and in 1837 they held a lottery to determine who would name the town. Alexander Gardiner won and named the town Dundee in honor of his Scottish hometown. In 1843 Scotsman Allan Pinkerton, later the renowned detective, set up business as a cooper. The town was incorporated in 1887.

West Dundee was hemmed in from development for years. The river formed a natural eastern barrier. To the north and west, the D. Hill Nursery, founded in 1855 by William Hill, specialized in fruit trees. The business grew to include evergreens, some of which were sent to Chicago for the World’s Columbian Exposition in 1893. Expanding to 900 acres, the nursery survived the Great Depression by running a cattle feed operation that continued through World War II. Some of the thousands of seasonal workers traveled to work from Chicago by electric car, while the majority lived on the nursery grounds.

In the 1950s a segment of the Hill property was sold and turned into the Highlands subdivision, which was annexed into West Dundee in 1956. The community also annexed property west of Illinois 31 in 1957, Royal Lane in 1960, and the Old World subdivision in 1966. The nursery eventually sold all of its land and moved to McHenry County. Plans for the Spring Hill Mall on Hill’s land began in 1973 and the project was completed in 1980. The 1.1 million-square-foot mall’s retail sales boosted West Dundee’s economy and created an estimated 1,600 jobs by 1982. New subdivisions were built to the west of Spring Hill.

With a population of 7,331 (2010 Census data), West Dundee has managed to keep its quaintness and small-town feeling intact. Designated historical sites fill the downtown and surrounding residential neighborhood. Restored buildings include structures reported to have provided refuge for slaves on the Underground Railroad.

Information on the Fox River Valley

As part of the upper Fox River Valley in northern Illinois, West Dundee enjoys one of the region’s most unique and treasured assets, the Fox River greenway. The Fox River serves as the Village’s eastern border and is quickly becoming one of the community’s finest recreational areas. The wonderful Riverwalk plan provides easy access to public walks and parks adjacent to the river. If you would like to be a part of our Riverwalk history,

Marquee Powered By Know How Media.